Port Aransas Chefs Finish Top Ten in Their Categories at the World Food Championships in Dallas! 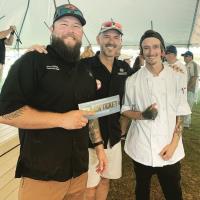 Port Aransas Chefs Finish Top Ten in Their Categories
at the World Food Championships in Dallas!

Six top chefs from Port Aransas won “Golden Tickets” to compete at the WFC, after qualifying at the 2nd Annual Texas Super Chef Throwdown Series in Port Aransas. Five of those chefs finished in the top ten in their competition categories at the WFC (the sixth chef finished 11th in his category). The winning chefs are:
“Competing at the WFC was an incredible experience. I was very blessed and honored to represent Port Aransas and Tortuga’s Saltwater Grill on the biggest stage in food sport,” said Chris Collins, Chef at Tortuga’s Saltwater Grill. “Placing third in the world in the Seafood category was surreal and incredible, but at the same time it is tough to be that close and not take home the gold. I’ll definitely be back next year with my eye on 1st place.”
“This was an epic culinary showdown,” commented Mike McCloud, president and CEO of WFC. “The amount of collective talent was the best we have ever seen, and it was evident in the results as we saw the tightest scores in our eight-year history.”
Texas is the first state franchise of the WFC, and Port Aransas is the statewide partner with WFC. Anyone from Texas who wants to compete at the WFC has to qualify through the Texas Super Chef Throwdown Series, or win through a qualifying event that is part of the Port Aransas sanctioning body franchise.

“The primary intent of why we pursued the designation of official licensed foodie destination and exclusive Team Texas qualifier for WFC, was the fact that we knew we have some of the best chefs in America performing culinary magic at many of our locally owned restaurants,” said Jeff Hentz, President and CEO of the Port Aransas/Mustang Island Tourism Bureau & Chamber of Commerce. “These results only validate this fact and show the world that Port Aransas is a world-class foodie destination.”